FrostBite™, when used in conjunction with the patented PSN cryodevice, is designed to freeze (cryoablate) and destroy a targeted tissue in situ (in place within the body). FrostBite™ is designed to support the growing field of natural orifice transluminal endoscopic surgery (NOTES) in which “scarless” abdominal operations can be performed with an endoscope wherein surgical tools, such as FrostBite™, can be introduced to target various tissues via the stomach wall, avoiding the need for invasive external surgical procedures.

Designed to evaluate the performance in situ, FrostBite™ was introduced via the working channel of an EUS device into the subjects stomach and then the cryoneedle tip was passed directly through the stomach wall into the target tissue. The study included the ablation of unique six sites within the liver and pancreas which were designed to assess the reproducibility, impact of vasculature and ability to visualize the ablation process. The results of the study demonstrated that FrostBite™ was able to consistently generate a 2cm x 3cm frozen mass resulting in a 6.28cm3 volume of ablated tissue. Ice ball formation was directly visualized in real time via ultrasound imaging and it was found that the final measured ice ball size via ultrasound correlated well with gross pathological direct measurement of the lesions. Finally, when the cryoneedle was placed ~0.5cm away from a major blood vessel, it was observed that the iceball was able to “conform to the blood vessel” as the heat from the blood vessel provided a protective effect thereby preventing dammage to the vessel wall, yet not effecting the destruction of the tissue surrounding the vessel.

The study was conducted by Dr. Isaac Raijman, AGAF, FASGE, FACP, a luminary internationally recognized endoscopist who has pioneered several novel endoscopic treatments. Dr. Raijman is a Clinical Associate Professor of Medicine at the Baylor College of Medicine and a Clinical Associate Professor of Medicine at the University of Texas Health Science Center in Houston. Commenting on the study, Dr. Raijman stated “The ability to visualize the cryoneedle placement in the target as well as the freeze process in real time via EUS based ultrasound imaging is very powerful. The consistency of the size of the lesion created by FrostBite™ was also very impressive. Further, the ability to target tissues in close proximity to major blood vessels could have significant ramifications as currently pancreatic tumors which are close to or involve vasculature are extremely difficult to treat.” When asked about the potential impact Dr. Raijman stated “FrostBite™ is impressive. I believe the technology has the potential change how gastroenterologists approach treating pancreatic cancer. FrostBite™ could be used to treat all stages of pancreatic cancer serving as either a primary or adjunctive treatment in combination with chemotherapy. Additionally, FrostBite™ may also be able to be used to reduce tumor size (down stage), converting non-surgical candidates to surgical candidates thereby providing late-stage patients with a new treatment path.”

Dr. John Baust (Founder, GI Cryo and President, CPSI Biotech) commented, “FrostBite™ is a first of a kind cryoablation catheter. The results of this study demonstrate FrostBite™’s ability to effectively target the ablation of unwanted tissues deep within the body using a minimally invasive endoscopic approach. Looking forward, the overall objective of FrostBite™ is to provide a powerful ablative tool to attack pancreatic cancer, which ultimately may reduce our reliance on other traditional approaches such as chemotherapy, radiation or major surgery to treat this deadly disease.”

Christen Springs (President, EndoRX Medical) commented, “Seeing the performance of FrostBite™ firsthand was impressive. Watching the placement of the cryoneedle and the formation of the cryolesion on the ultrasound image is truly unique within the GI space. We are excited to be partnering with GI Cryo and CPSI to advance the platform from the pre-clinical stage through FDA approvals and into clinical studies.”

More information on the FrostBite™ cryoablation platform can be found at www.GICryo.com, www.endorxmedical.com or www.CPSIBiotech.com.

About GI Cryo – GI Cryo is a private, start-up medical device company focused on the commercialization of the novel Pressurized Subcooled Nitrogen (PSN) system, FrostBite EUS-compatible cryocatheter and other devices for the treatment of gastroenterological based cancers and other GI diseases. GI Cryo has partnered with CPSI Biotech to gain access to this advanced, patent protected cryoablation platform in the GI space. This platform includes technologies which may ultimately be used to target cancerous and non-cancerous tissues within the pancreas, liver, stomach and esophagus.

About EndoRx – EndoRx is an early-stage medical device development and management consulting company with a focus in advanced endoscopy. EndoRx’s first device project, a novel biliary stone retrieval device, was successfully commercialized and acquired by ConMed. EndoRx maintains an organic pipeline of disruptive endoscopic technologies and assists other startups in transitioning their device projects from the research and development phase to successful commercialization.

Disclosure Notice: The information contained in this release is as of June 1, 2022. The parties assumes no obligation to update forward-looking statements contained in this release as the result of new information or future events or developments. GI Cryo and CPSI’s technologies do not have regulatory clearance for commercial sale and are currently intended for “Research Use Only”.

With the exception of the historical information contained in this release, this release contains materials and statements related to future business, financial performance, future events and/or developments which constitute forward-looking statements. The matters described herein contain forward-looking statements that involve risk and uncertainties that may individually or mutually impact the matters herein described, including but not limited to, any parties ability to develop and market new products, to retain and attract key employees, to obtain regulatory clearances and approvals for its products, to effectively react to other risks and uncertainties, such as fluctuation of quarterly financial results, contract and grants acquisition, reliance on third party manufacturers and suppliers, litigation or other proceedings, economic, competitive, governmental impacts, whether pending patents will be granted or defendable, validity of intellectual property and patents, the ability to license patents, the ability to commercialize developmental products, competition from existing and new products and procedures and any parties ability to raise the capital that is required to accomplish the foregoing. 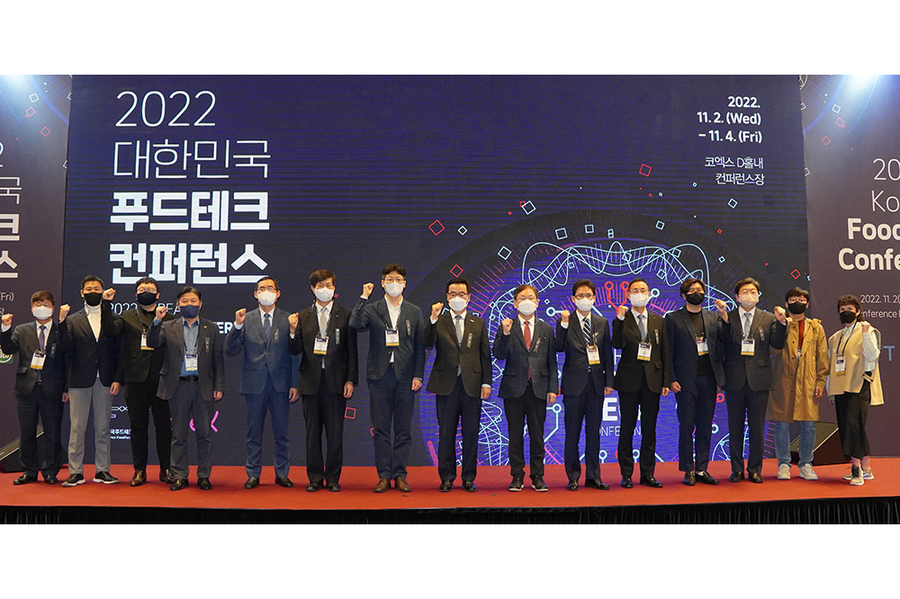 Future trends in the food industry in one glance! Korea’s largest food exhibition ‘COEX FOOD WEEK 2022’ opens on the 2nd!